Next time you have a reason to check out Napoleon Bonaparte’s coat of arms, look closely at the left hand side. You will see a grouping of honeybees — Napoleon’s choice to represent his imperial rule.

The bee apparently sent several different messages to Napoleon’s constituents. It referred back to earlier French kings who chose the bee as a symbol of immortality and resurrection. The bee is also a nod to French industry where it was incorporated into clothing, curtains, carpets and furniture.

In his coronation ceremony, Napoleon — proclaimed Emperor of the French in 1804 — wore a robe decorated with what was said to be 300 bees. So it’s not surprising that his nickname was “The Bee.”

Napoleon also chose the eagle for his coat of arms because of the bird’s association with military victory. Historians note that the eagle beat out a number of competitors for the honor, including a  lion, an elephant, a cockerel, an oak tree and the fleur de lys. 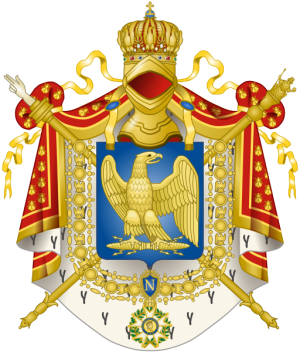 In the end, these carefully chosen symbols didn’t help. Napoleon was defeated in the Battle of Waterloo in 1815, bringing to an end the Napoleonic era. He died in 1821.