More than two million honeybees were killed earlier this week after being sprayed by a pesticide intended to wipe out mosquitoes, including ones causing the Zika virus.

An official in Dorchester County, S.C., where the spraying occurred, said it was “a mistake,” according to an article in The New York Times on September 2.

A mistake? Apparently a county official had failed to “follow the local government’s standard procedure of notifying registered beekeepers about the deployment of pesticides,” the Times wrote.

One of those registered beekeepers found the dead honeybees shortly after the spraying when she went into her apiary and noticed that the usual hum of activity had gone totally silent.

Dorchester County recently reported four travel-related cases of Zika in the area, according to the Times, which caused officials to decide on aerial spraying using a mosquito-eradication pesticide called naled. Naled is said to kill not only honeybees, but other pollinators as well.

The website of the U.S. Environmental Protection Agency says that while naled “does pose some risk to aquatic invertebrates (such as shrimp and water fleas) and terrestrial wildlife, it dissipates rapidly and does not persist in the environment…” However, the site also suggests that “applications made between dusk and dawn, while bees are not typically foraging, can reduce exposure to honey bees.”

Only if you are told by your local government that the “application” is about to occur.

Clearly the need to fight the Zika virus should be high on everyone’s list, but it’s equally clear that we should be taking every precaution to limit the collateral damage caused by pesticides. Two million honeybees can’t exactly be replaced overnight.

I don’t think Colony Collapse Disorder – with all its still unknown causes – is yet on enough people’s radar screens. This most recent catastrophe is just one example. As Juanita Stanley, owner of the stricken apiary, noted to the Times: “One word is very fitting. It’s ignorance. We, as humans, are not doing the research and finding out the facts before we make decisions.” 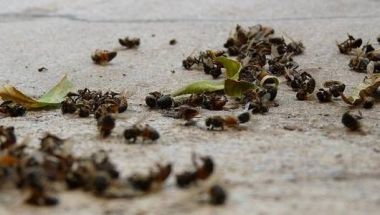 Try reading this out loud: “In converting the nectar into honey, the bees also convert the dihydroxyacetone into methylglyoxal.”

It’s from a photo caption in a September 1, 2016, Wall Street Journal article reporting on manuka honey, a very expensive New Zealand brand of honey that is thought to help in the healing of wounds, burns and ulcers, among other uses. The honey’s popularity has led New Zealand-based Unique Manuka Factor to apply for a trademark, effectively “preventing producers outside New Zealand from labeling their honey manuka,” says the Journal. The article points out that the export value of ordinary honey is about 20 U.S. cents an ounce [while] manuka honey can bring $3.40” an ounce.

The labeling war reflects the burgeoning popularity of this “superfood,” which, according to the Journal, has been acclaimed by TV personality Kourtney Kardashian and tennis star Novak Djokovic. Part of its appeal reflects the fact that it can either be eaten or, alternatively, added to products that can benefit from the antibacterial properties of methylglyoxal.

And you thought honey was one of those rare, non-controversial, much-loved, natural products that couldn’t possibly cause any dissension anywhere?

September is back-to-school month for many kids, but it’s something even more important, at least if you’re a bee or beekeeper. It’s National Honey Month — so designated by the National Honey Board back in 1989 as a way to support the beekeeping industry and to remind people of honey’s role as a sweetener and a source of nutrition. National Honey Month is also a nod to all the beekeepers who typically spend August and September harvesting honey from their hives, making sure to leave enough for the bees to eat during the winter.

Below, in honor of the occasion, are two favorite — and simple — honey-bearing recipes.

Melt 1/2 stick butter in shallow baking pan. Stir in 1/2 cup honey, 1/4 cup prepared mustard, 1 tsp. salt, and 1 tsp. curry powder. Roll six chicken breasts in the mixture to coat both sides. Cook in same pan at 375 degrees for approximately 50 minutes (depending on the thickness of the chicken). Baste periodically.

An 11-year-old girl from Austin, Texas, will soon be seeing her product – Me & the Bees Lemonade – on the shelves of Whole Foods.

According to an article in the Huffington Post by blogger Mary Snapp, Mikaila Ulmer has adapted a 1940s recipe for lemonade by adding in local Texas honey. Her concoction won an investment from the ABC series “Shark Tank” plus the Whole Foods distribution deal.

Better yet, from beekeepers’ point of view, she is investing some of her profits to, among other groups, the Texas Beekeepers Association, according to Snapp, who is corporate vice president of Microsoft Philanthropies.

The seventh grader is also trying to spread the word about the dangers honeybees face in today’s environment, and what young people can do to help protect them. Snapp says Ulmer is learning how to code “so she can build a mobile app as an educational resource for bee protection.”

Meanwhile, Microsoft is partnering with WE Day in a broadcast celebrating Ulmer and others that will air August 28, 2016, on ABC. The event is organized by WE Charity, a group that, according to its website, “motivates youth to take action on local and global issues.”

Twenty-first century beekeepers know that using a bellows to gently blow smoke on a beehive makes it easier to harvest the honey without getting stung by hundreds of furious insects. Smoke is thought to sedate the bees while the honey heist takes place.

It’s not exactly a new strategy. An article from The New York Times on August 9 analyzed the impact of early humans’ ability to build fires. On the plus side, for example, fire allowed people to keep warm, socialize together around the hearth, and eat cooked rather than raw food. On the negative side, some scientists contend that fires allowed certain diseases, including tuberculosis, to spread more easily among people huddled in close contact around their fireplaces.  The illustration that accompanied the article showed a cave painting thought to have been done 15,000 years ago in Spain which depicts a person holding a lit torch in one hand to smoke a beehive. In the other hand is a sac presumably used to hold the purloined honey.

Below is a  photo of the cave painting, although not the one used by the Times.

Sebastian Wright has two goals: to save as many bees as he can, and to get others to do the same.

Wright, 12, has spent the last three years installing and tending beehives in Milton, Mass., his hometown. So far, he has launched 13 hives, each with about 60,000 bees, according to an article by Bret Hauff in The Boston Globe.

Wright, co-founder of the Billion Backyard Bee Project, says his plan is to set up 20 hives and sell the honey that the bees produce as a way of defraying his costs, notes the article. He recently placed two hives with the nearby activity-oriented New England Base Camp so that kids who attend can get first-hand knowledge of bees and the dangers they face from Colony Collapse Disorder.

Wright began to get serious about his project after his first hive failed three years ago, the article says, adding that part of Wright’s program is trying to discourage the use of pesticides. Many beekeepers contend that pesticides used by the agricultural industry are one of the major contributors to the dramatic decrease in our bee population over the past 10 years, although other factors – such as parasites, fungi, mites and climate change – are also seen as adding to the decline.

Matthew Willey, a 46-year-old muralist, has made it his goal to paint 50,000 honeybees on murals around the world, according to an article this summer in the Raleigh, N.C., News&Observer. Willey wants to highlight the dangers that bees are facing in today’s environment.

Correspondent Steve Bydal accompanied Willey to Estes Hills elementary school in Chapel Hill, N.C., as he started painting the bees on an exterior wall of the school’s gym. Estes Hills has had a pollinator garden since 2014 that is taken care of by the students and teachers, according to Bydal.

Willey plans to do murals in Durham, N.C., British Columbia, Nepal and Australia. He chose the number 50,000 because it represents the number of bees often found in a bee hive. Read more about him here. 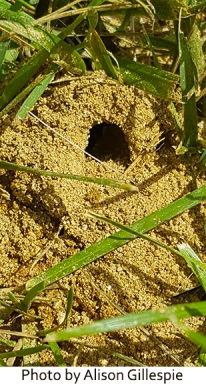 It’s hard not to be alarmed when hundreds of ground bees suddenly pop up out of their holes and start to fly around your garden in late spring. But an article in Modern Farmer by Alison Gillespie says we should welcome these insects, not try to kill them.

Ground bees, Gillespie says, are excellent pollinators and they rarely sting. They don’t make honey, they are solitary — one bee lays eggs and cares for them in her own ground nest — and they are plentiful, making up “more than 70 percent of the 4,000-plus bee species native to North America.”

Yellow jackets also make their nests in the ground, but they can sting you if disturbed. They enter their nests through one large hole, Gillespie writes, while ground bees enter and exit from tiny openings that “look more like ant hills or teeny chimneys” — a good way to decide if you’re looking at the home of wasps or of ground bees.

Children’s Discovery Museum of San Jose, Calif., is creating 3,600 square feet of bee habitat where kids and their families can observe the lives of honeybees and other pollinators. For the next month, the Museum is conducting an online fundraising campaign whose proceeds will support three beehives and a pollinator garden. Check out the site below and see how you can contribute to the effort.

Just wanted to remind everyone — now that we are winding down the summer season with all its wonderful fresh  fruits — that desserts like blueberry pie, strawberry pie, apple pie, and cherry pie could become less available if bee colonies continue to dwindle. Not to mention all the vegetables, nuts, flowers, and trees that will also suffer if we don’t take care of our most industrious pollinators. Bees have been around for millions of years and have never needed our help to survive. Now they do.

Bees on the Roof
Blog at WordPress.com.